What Puts Us Off Food? Sussex Scientists Use Snails To Find Out 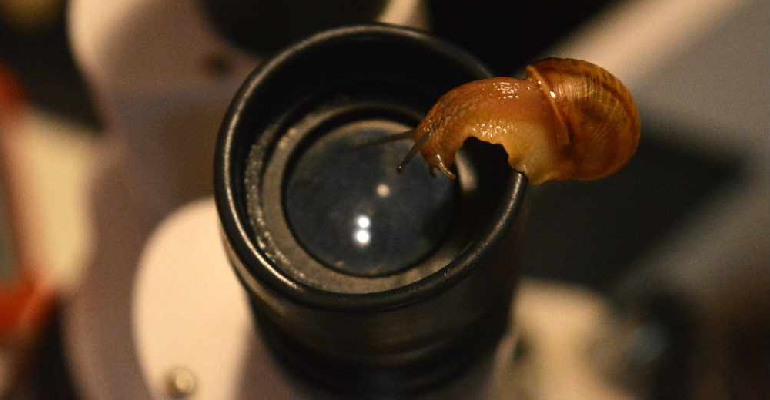 Scientists at the University of Sussex are researching the neurology behind why one bad curry can put us off for life.

Sugar-loving snails are being used as models to figure out why one negative experience with food can leave us unable to stomach the thought of eating that particular dish again.

Sussex Researchers think these bad experiences could be causing a switch in our brains, which impacts our future eating habits.

Normally, like other animals, snails will start feeding on sugar as soon as it is presented to them. But scientists used training involving tapping the snails gently on the head when sugar appeared, this resulted in the creature refusing to feed on the sugar, even when hungry.

When researchers presented the trained snails with a piece of cucumber instead, they found that the animal was still happy to eat the healthy option - showing that the taps were associated with only the particular type of food they were trained to reject.

When the team of Sussex Neuroscience researchers led by Dr Ildiko Kemenes looked a little closer, they discovered a neuronal mechanism that effectively reversed the snails' usual response to sugar after the conditioning training had taken place.

Dr Ildiko Kemenes, Reader in Neuroscience in the University of Sussex School of Life Sciences, explained:

"There's a neuron in the snail's brain which normally suppresses the feeding circuit. This is important, as the network is prone to becoming spontaneously activated, even in the absence of any food. By suppressing the feeding circuit, it ensures that the snail doesn't just eat everything and anything. But when sugar or other food stimulus is present, this neuron becomes inhibited so that feeding can commence.

"After the aversive training, we found that this neuron reverses its electrical response to sugar and becomes excited instead of inhibited by it. Effectively, a switch has been flipped in the brain which means the snail no longer eats the sugar when presented with it, because sugar now suppresses rather than activates feeding."

George Kemenes, Professor of Neuroscience at the University of Sussex and a senior member of the investigator team, added:

"Snails provide us with a similar yet exceptionally basic model of how human brains work.

"The effect of the inhibitory neuron which suppresses the feeding circuit in the snail is quite similar to how, in the human brain, cortical networks are under inhibitory control to avoid 'runaway' activation which may lead to overeating resulting in obesity.

"In our research, the negative experience the snail had with the sugar could be likened to eating a bad takeaway curry which then puts us off that particular dish in future.

"We believe that in a human brain, a similar switch could be happening where particular groups of neurons reverse their activity in line with the negative association of a particular food. "

The research, funded by the Biotechnology and Biological Sciences Research Council (BBSRC) and published in Current Biology, also revealed that when the neuron was removed entirely from trained snails, they returned to eating sugar again.

"This suggests that the neuron is necessary for the expression of the learned behaviour and for altering the response to sugar.

"However, we cannot rule out that the sugar-activated sensory pathway also undergoes some changes, so we don't make the assumption that this is all that's happening in the brain."